Old Dead Things became a Limited Liability Corporation in 1998, but the company’s roots began in 1995. Jim had always been an avid artifacts hunter. In the spring of 1995, he was hunting arrowheads near Midwest, Wyoming. As he crossed a draw between ridges, he saw something strange sticking out of a cut bank. It was a baculite, and that was the beginning of our love affair with fossils.

Jim was teaching high school English in Midwest and Linda was commuting the fifty miles to Kelly Walsh in Casper and teaching science. Every night after school, Jim collected Cretaceous fossils on several of the ranches where he had permission to collect. Eventually, the garage began to fill up with baculites, ammonites, clams and a variety of other fossils. We decided we needed to either quit collecting, build a bigger garage or go into business. Our first fossil show was in Casper. We sold one baculite and one pinna clam, but that was enough to pursue having a business.

In the mid-1980s, we dug fossil fish in Kemmerer. Linda really liked it. Jim dug awhile, then went arrowhead hunting. In the early 1990s, we dug fish again, and again it was difficult to get Linda out of the quarry. In 1998, we became share diggers at Warfield Quarry and in 2000, we were the managers of the Warfield Springs fossil fish Quarry. Now Jim spends five to six weeks digging fish every summer.

In November 1998, Jim found a mosasaur near Midwest. The following spring, Warfield Fossil Safari excavated it. This find “put us on the map,” so to speak, and opened a lot of doors.

Since that first show in 1997, we have continued to sell Cretaceous fossils, but have also added split fish and 18″ layer fish, rocks, minerals and fossil related gear to our tables. We started with one eight foot table that we couldn’t fill up to a minimum of 32 feet at most of our shows. Linda passed away in April of 2015. 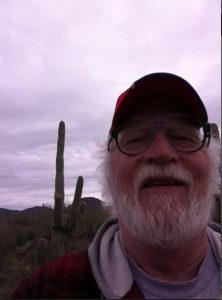